On Basu Chatterjee’s 94th birthday, a journalist's account of how an interview with the legendary director almost backfired

On Basu Chatterjee’s 94th birthday, a journalist's account of how an interview with the legendary director almost backfired

Basu Chatterjee directed more than 50 films and TV serials — a staggering number that not many directors of the Hindi film industry can match. His films, that portrayed the joys and sorrows of the common man, were so similar to Hrishikesh Mukherjee’s that it was often difficult to differentiate between their works. Working as a journalist, when I shifted from Delhi to Mumbai, interviewing Chatterjee became a pressing priority. But when I asked for his phone number from my colleagues, I drew a blank.

I then looked him up on the internet but only learnt that he lived somewhere in Santacruz West, near RD Burman’s house. Excited by this lead, I set out to find his home sometime in November 2014. An auto-rickshaw driver who knew the Santacruz locality like the back of his hand dropped me outside Burman’s house. Walking past it, I couldn’t help wonder if Burman composed the music of Chatterjee’s film Manzil in this very house. Its melodious number, 'Rimjhim Gire Sawan', which will easily find a place amongst my 10 favourite songs, captured the raw beauty of Mumbai’s monsoon like no other song has been able to.

Making queries from the security guards of the nearby houses, my half-an-hour search finally led me to my destination. It was Chatterjee himself who came to the door. Without unlocking it, he looked at me questioningly through the grille. When I introduced myself and requested him for an interview, he refused out-rightly. “Is this a way to come for an interview?”

I apologised for barging in without taking an appointment but it didn’t soften him. The quest for the interview could have ended here. But I didn’t lose heart and apprised him how eagerly I had watched his films and TV serials and how powerfully they have influenced me.

“I’m sorry but I couldn’t think of any other way to meet you,” I explained, “as I didn’t have your phone number.”

“If you could give me your phone number, I’ll take an appointment and come later.”

Chatterjee was still miffed but, perhaps, sensing my enthusiasm and sincerity, he shared his number with me.

I called him three days later. He asked me to meet him on the coming Sunday.

Born on 10 January, 1927 in Ajmer to Bengali parents, Chatterjee spoke crisp Hindi. After completing his education in Agra and Mathura, he came to Bombay in 1948 nursing his desire to be a filmmaker. He worked as a librarian in a military school for a while. Later, he drew cartoons for the Blitz magazine. It was only 18 years after coming to Bombay that Chatterjee got a chance to assist Basu Bhattacharya in Teesri Kasam in 1966. Three years later, he went on to direct his first film, Sara Akash, after the Film Finance Corporation (now NFDC) gave him a loan of Rs 2.25 lakh. Based on Rajinder Yadav’s novel, the film turned out to be a sleeper hit. Rajshri Films who distributed Sara Akash asked Chatterjee to direct Piya Ka Ghar. From there, Chatterjee went on to direct several remarkable films like Rajnigandha, Choti Si Baat, Chitchor, Shaukeen, Ek Ruka Hua Faisla and TV serials like Rajani, Byomkesh Bakshi, Darpan and Kakaji Kahin. There was such variety in his films and TV serials — from romance to comedy, from detective fiction to courtroom drama — that it is impossible to pigeonhole Chatterjee in a certain category.

Chatterjee ushered me into his living room and offered me a cup of tea. Dressed in a half-sleeve shirt and a lungi, he sprawled comfortably on the sofa. Numerous film awards and stack of books adorned his room. A framed poster of his film Chitchor hung on the wall behind him.

For a man who had said so much through his films and TV serials, I expected Chatterjee to be a fluent speaker. But as I began tossing my questions at him, I was surprised to notice that he was a man of few words. So few words that he often replied in monosyllables. In fact, my questions were turning out longer than his answers. I couldn’t make out if Chatterjee was still angry or was it his natural way of communicating. Throughout the interview, he remained in a reflective mood and didn’t smile even once. If his answers were going to be so short, this interview was unlikely to see the light of the day. To solve the problem, I repeated a few questions and framed new ones as I interviewed him. 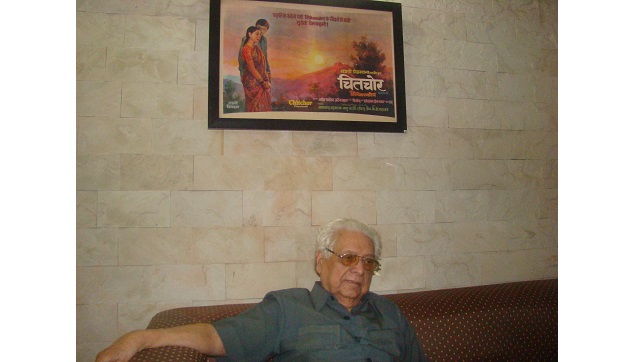 I managed to write the short interview but I had a nagging doubt if Chatterjee had turned cynical, unfriendly in his later years. He had told me that he had written a few scripts but the producers were not keen to finance his projects. For a man who had made so many outstanding films, it must have been heartbreaking to retire.

It was several years later that my doubts were clarified, when I chanced to talk to his assistant director Ravinder Singh, who worked with him for nearly 13 years. “By nature, Basuda was reserved,” he told me. “He was not given to saying things just to make you feel better. And he seldom laughed. When he was amused he smiled faintly.” Ravinder also informed me that Chatterjee didn’t turn bitter in his later years. He was always working on one story or another. When he didn’t have much work in the Hindi cinema, he made several Bengali films.

Far ahead of his times, Chatterjee mostly adapted literary works for the screen, a trend that’s witnessing a revival on Netflix and Amazon Prime these days. His films were made on low-budgets but they were always high on the entertainment quotient and quality.
Chatterjee had lamented during our interaction that filmmaking had become pure business nowadays. "What sells a film these days isn’t essentially its quality, but the money spent on promoting it. Ironically, the expenditure of a film’s promotion often exceeds its production cost! It’s a humungous waste," he'd said.

Indeed, Bollywood wastes away not just money but also talent. Chatterjee, like so many other gifted artists, was blatantly ignored when he had so much to offer. He was also a very deserving candidate for the Dadasaheb Phalke Award but never got it. Even so, Chatterjee has left behind such amazing body of work that his gentle humour and his championing of the extraordinary ordinariness of the common man’s life will find a way to live in our collective conscience.

Martin Scorsese’s Pretend It's a City documents life in New York through the eyes...

AR Rahman turns 54: A look at the veteran composer's international...

Grammy Awards pushed to March due to recent surge in coronavirus...

How America's ship of the future was killed by the jet...

At the age of 10, David Macaulay immigrated to America from England in 1957 with...

After violent pro-Trump protesters stormed the US Capitol on Wednesday, a growing...

Protective immunity against novel coronavirus may last for over eight months, new...

Mick Mulvaney, who formerly served as President Trump's chief of staff, has resigned...

India vs Australia: 'Wanted to put Ashwin under pressure',...

After the end of day’s play, Smith said he was looking to put senior Indian off-spinner...

Mindful eating and portion control are two factors that can put you into calorie...

PM should talk directly to farmers; govt has lost trust:...

Hundreds of law enforcement officers have mobilized across Washington, DC, as thousands...